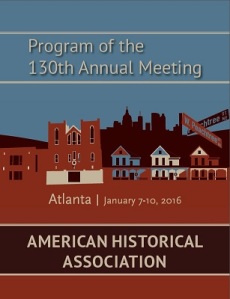 Earlier today I sent in a post to a special message board set up by the American Historical Association. The Board is an extension of AHA Communities, and has been created for AHA members to debate matters to be presented at the Business Meeting in advance. (Please note: you cannot access it unless you are a member of the organization: if you are a member, you will have received an email from Executive Director Jim Grossman about how to access and use the site.) At the Annual meeting in Atlanta, members will decide whether to vote on the following resolution presented by HIstorians Against the War (HAW): “Protecting the Right to Education in the Occupied Palestinian Territories.” Yes, I know it would be wiser for me just to shut up. But that has never been my strong suit, and given the extent of my reflections on resolutions in other organizations, I think I have something new to say. I have opened the comments on this post to constructive debate and criticism: everything else will be deleted.

I will not be in Atlanta to vote on this resolution, and I know — as with the American Studies Association resolution on Boycott, Divest and Sanction that was so contentious several years ago — that I have many friends on both sides of the issue.

I think concerns about global and local Anti-Semitism are very real for people my age. When I was growing up outside Philadelphia in the 1960s, Jews were excluded from employment, housing, education, economic, and social life because of formal and informal barriers or quotas. Jewish children who were my friends were chased, taunted and beaten by other children — children who were egged on by parents that routinely used racist slang to describe Jews who they encountered in public, as fellow professionals, or as parents. This is a very vivid memory for me, and I am quite sure that it was not specific to Philadelphia.

However, few people, even well-educated readers like ourselves, are truly knowledgeable about discrimination and violence that occurs at a further reach unless we have a scholarly or profesisonal reason to be well-informed: that was certainly true of me prior to the ASA resolution, and at the urging of friends, I worked to correct that. However you plan to vote, or even if you are not attending the AHA, if you have not already done so, please educate yourself about conditions in the territories occupied by Israel, as well as the lack of civil rights and economic opportunity for Palestinians who live in Israel proper. More importantly, talk to Palestinian students and colleagues in your own university about their experiences, including being spied on, tracked and surveilled in the United States by Israeli agents sanctioned by Homeland Security. Ask them about the interrogations they face when they go home about activities they have participated in, books they have checked out, and associations they have developed at your own university. If you have not talked to Palestinians affected by the Occupation in Israel or the Occupied Territories, please do, and if you don’t know any Palestinian students or colleagues, ask yourself why you have not made that effort before taking a stand on this issue. I wish I had done so.

Were I to be present at the AHA Business meeting, I would find it hard to focus on the merits of the resolution, even though I think it has merits, in part because it is inadequate to my concerns. US intervention in the Middle East has produced such a wide-ranging, lethal, calamity for so many people, many thousands of whom I encountered on the beaches and roads of Lesvos and the streets of Istanbul this past summer. I find the lack of concern about this in the United States to be heart-breaking. Academic freedom, and the freedom of Palestinians to access education, are crucial human rights that are now being violated, and this deserves note; yet my attention also widens to the millions of US citizens who are currently being denied freedom of access to education; who are subject to what appears to be summary execution at the hands of the police; and who are forced to take out — and in some cases swindled into assuming — crushing debt to become educated at the universities where we all work. The United States has decided to support war rather than education, healthcare or food security, at home and abroad. I don’t say this as a way of undermining the importance of the resolution sanctioning Israel that you will vote on, or as a deflection: I offer it simply as an explanation for why an important statement of principle that addresses one slice of this gigantic harm seems so inadequate to me. I want us to care about the Occupied Territories *and* the rest of the world. I feel indelibly implicated in the terror that has been unleashed on the world: responding to it by voting on this resolution at the AHA feels both necessary and wrong.

But I know that this resolution does not seem inadequate to my friends who support it, and, as one friend said to me several years ago, in the absence of a broader strategy to address this global harm backed by the US, why not endorse this sentiment? I would like to emphasize: the last two years have persuaded me that both sides are partly right in this matter, neither is completely right, and neither is wrong. Failing to recognize that among ourselves can make everything far more bitter than it needs to be. What I learned from my experiences in the ASA is that the struggle itself can do terrible damage, and that damage can affect your future relationship with the organization and with valued colleagues: please be mindful of that as you argue with each other, and do not put your friendships on the line or accuse each other of lacking moral fiber. Try to let people speak without judging them, if you can.

Then vote if you must.

Honestly, as citizens, as scholars, and as members of the AHA, I think we can do much better work to address global violence and the endemic violation of human rights than voting for or against, and berating each other about, a resolution. My own commitments on this issue developed because I read a lot, and I talked to many people, and I wish the ASA had promoted that broader conversation rather than putting everything into the BDS resolution. All of the dangers that concern people on both sides of this resolution are terribly real and urgent, and will provoke passionate responses: pro- and anti- resolution people might do well to decide whether they really want to put energy into defeating, or listening to, each other; producing a resolution that will have no real effect for those who are immiserated by violent occupation or crafting a long term organizing startegy to develop and fund strategic, on the ground interventions on behalf of academic freedom in the Occupied Territories and everywhere it is currently denied.

That resolution, I would vote for.

With greatest respect and good will,