Why won’t they say Donald Trump’s name at the Republican National Convention?

Television journalists like Rachel Maddow have been talking about it since The Mistake on the Lake went live on Monday evening, July 18. As Frank Bruni put it in a  New York Times (July 20, 2016) op-ed:

By saying almost nothing about Donald Trump on Tuesday night, Paul Ryan said it all.

Trump isn’t the star of his own convention. Hillary Clinton is.

What really animates the Republicans gathered here is their antipathy toward her, not their embrace of him. Speaker after speaker makes the case against her, not the one for him.

And a weird impression is taking hold: They’re filling the minutes and running out the clock with all the bad that they can dredge up about her because there’s not enough good to plumb in him.

Monday night was so bad and bizarre that, in the run up to Melania Trump’s highly anticipated speech (which turned to disaster when a member of the Twitterati discovered that portions of the speech were identical to Michelle Obama’s 2008 endorsement of her husband), I began to do word clouds to pass the time.

They are easy to do: you go to Worldle or WordClouds.com, paste in text, and see what pops up. Words used most frequently are the largest; least used words may not appear at all. While word clouds are perhaps the laziest data visualization technique around, and eliminate context entirely, I agree with Dave DeCamp that they can be “an effective starting point for deeper text investigation.” In the case of the RNC, there may be no deeper text. On the other hand, what might otherwise seem like meaningless twaddle does resolve into coherent messages.

For example, perhaps the weirdest moment of Monday night’s “Keep America Safe” theme was Pat Smith, the visibly grieving and enraged mother of computer specialist Sean Smith, killed at a U.S. compound in Benghazi in 2012. In a flood of unverifiable accusations that went way off whatever prepared script had been vetted, Smith portrayed Hillary Clinton as a monstrous person and demanded that the former Secretary of State be prosecuted and imprisoned for Sean’s death. In a reality TV moment that some people described as heart-wrenching, and I thought was exploitative, Smith obsessed about Clinton and did not mention Donald Trump at all.

Arkansas Senator Tom Cotton got away with an utterly forgettable speech about what used to be called “family values,” putting him in the camp of “wait and see” Republicans. As Ryan Lizza of The New Yorker (July 19 2016) explained, Cotton’s “leading benefactors” are the conservative Club for Growth and William Kristol, both of whom “have become leading anti-Trump voices, but Cotton has cautiously embraced his Party’s controversial nominee.”  Cautiously indeed: he did not mention Trump’s name once.

But you might say — and you would be right — that these are minor players. So what about Speaker Paul Ryan, the leader of the party, whose appearance on night 2 of the convention was a respite from bizarre characters promising Hillary Clinton that orange is the new black? Ryan said Donald Trump’s name twice, in each case pairing it with the veep pick, Indiana governor Mike Pence. HIs word cloud looks like this: 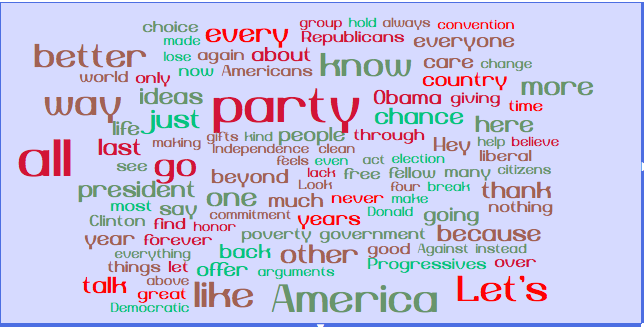 Again, no Trump. Aside from the non-attendance of major GOP figures, it’s the biggest sign yet that the Republican Congress is very, very worried that is will not make it through this presidential cycle undamaged.