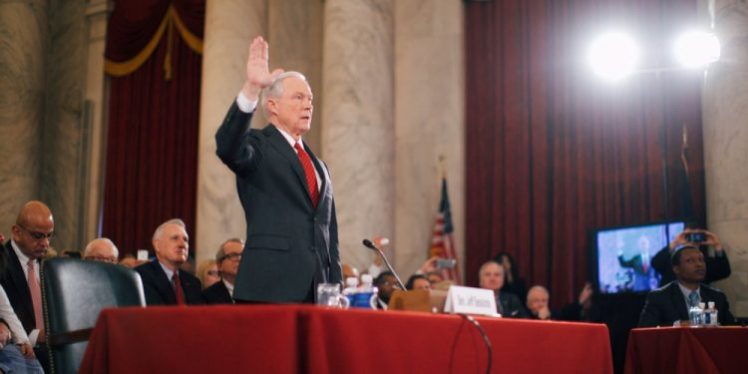 If any of Donald Trump’s Cabinet nominees are turned back, Jefferson Beauregard Sessions III is not going to be among them.

Sessions, at the age of 70 still the “junior” Senator from Alabama, was one of three nominees to begin the confirmation process yesterday. While he faced skepticism, and even anger, from senior Democrats Dianne Feinstein (CA) and Patrick Leahy (VT), Sessions parried their questions with skill and self-assurance. Protests periodically erupted behind him, and activists — some dressed in fake “Ku Klux Klan” costumes, and others wearing pink robes and Statue of Liberty  crowns — were dragged from the room by Capitol police. The latter group were identified by news sources as being from Code Pink, the woman-led antiwar group, but the “Klansmen” — who pretended to be there in support of Sessions, and waved white foam fingers that said “KKK” and “Go Jeffie Boy!” —  have not been identified. As the first protesters erupted prior to Sessions being sworn in, he chatted with his daughter Ruth and her Asian-American husband, John Walk while cuddling one of their four daughters.

The optics were good, particularly since the allegations of racism have dogged Sessions for years were sure to be the centerpiece of the hearings. As importantly, President-elect Trump could not have made a pick that made a firmer break with the Justice Department of the Obama years, a fact Republican Senators sometimes alluded to with relief. Following in the footsteps of Eric Holder and Loretta Lynch, two African-American Ivy League graduates, Sessions was educated at a small Methodist college and the University of Alabama School of Law, and would be the first Alabaman to ever serve in the job. Furthermore, Sessions is returning to the Justice Department in triumph. A veteran prosecutor, he was denied confirmation as a federal judge in 1986 amid testimony that he had actively discriminated against African-Americans during his time as U.S. Attorney for the Southern District of Alabama. Two Republicans — Arlen Specter of Pennsylvania and Charles Matthias of Maryland — voted with the Democrats to deny him the appointment. The ultimate nail in the coffin of Sessions’ nomination, however, was a painful one: Howell Heflin, the senior Senator from Alabama declared his opposition to Sessions’ candidacy.

By Senate tradition, no nomination can survive opposition from a home state Senator. Upon Heflin’s retirement a decade later, Sessions, then Attorney General of Alabama, ran for and won the seat, giving Alabama two Republican Senators for the first time since Reconstruction.

As yesterday morning’s hearings commenced, Senate Judiciary Committee chair Charles Grassley (R-IA) demonstrated another Senate tradition. A colleague, Sessions was now greeted like an old friend to be trusted, not as he was in 1986, an Alabaman little known in Washington, dogged by rumors of racial bias that were easy to believe about a man named after a Confederate general. Indeed, the Republicans seemed eager to revisit this moment and set it right. Susan Collins (R-ME), who had been one of very few Republicans to announce that she would not vote for Donald Trump, noted in her opening remarks that Specter, now deceased, had once told her that the vote against Sessions was one of the few he regretted. As The Nation reported Collins’ speech, “I have never witnessed anything to suggest that Senator Sessions is anything other than a dedicated public servant and a decent man,” Collins told committee members, before repeating talking points that claim Sessions, “is not motivated by racial animus.”

There are sharp divisions of opinion on that, and witnesses in and out of the hearing room will continue to express their concerns about whether Sessions will respect or undermine the hard won civil rights of immigrants, women, and racial and sexual minorities.

Throughout the day, Sessions was questioned closely about past incidents that have led to the charges of racism, sexism and homophobia: Democrats challenged him, and Republicans eased these issues out into the open with expressions of sympathy. Sessions recalled many of these events quite differently than they have been portrayed in the news, describing at length why he believed these aspects of his past had been misrepresented and illuminating what he recalled as a larger context for each one. As one example, a voting rights case in which he prosecuted African-Americans who had allegedly altered absentee ballots, was, he said, brought by African-American, not white, plaintiffs, and he viewed himself as defending Black civil rights in that case.

Sessions also repeatedly stated that his partisan role as a politician was fundamentally different from that of Attorney General. Asked whether he would support Roe v. Wade and Obergefell, the Supreme Court cases that established the right to abortion in the first trimester and the right to same sex marriage, Sessions responded that he would: the first was “the law of the land” and the second “settled law.” Sessions also admitted, in response to Senator Lindsay Graham (R-SC) commenting that the two of them knew “what was meant” by the term “Southern conservative,” that being called a racist was deeply “painful,” particularly given Alabama’s history of white resistance to desegregation.

Indeed, Sessions seemed genuinely upset when Graham asked him how he felt about being called a racist. He flushed, and pressed his lips together as if he were trying to regain control of his emotions. Sessions, Graham (a long-time bachelor sporting a spiffy lavender tie), and John Cornyn (R-TX) seemed to commiserate and bond with each other about the legacy of the civil rights movement for Southern whites, and the stigma that they seemed not to be able to shake in the eyes of non-Southerners. However, unlike Donald Trump, Sessions spoke out forcefully against white supremacy: “I abhor the Klan,” he said vehemently, “and what that it represents, and its hateful ideology.”

“Just because somebody’s nice doesn’t mean they’re not racist,” tweeted Rev. William Barber, leading protests from the streets of Washington as the hearings proceeded. “Racism is seen in the heart of your policies.” But Sessions’ performance was a skillful one that not only marked a departure from Trumpism, but also made the protests and mockery by some activists and journalists seem crude and cruel by comparison. In addition to the eruptions of the faux Klansmen, an MTV reporter accused Sessions of using his granddaughter as a “prop” and demanded that he “kindly return this Asian baby to the Toys `R’ Us you stole her from.” Before being taken down, the tweet was widely reported and condemned on conservative and alt-right news sites.

Despite the fact that fellow Senator Corey Booker (D-NJ) will break precedent and testify against Sessions, and Democrats have vowed to oppose him, short of some undiscovered embarrassment, the nomination will clearly go through. You heard it here first: Jeff Sessions will take charge of the nation’s top civil rights office as the first Attorney General from Alabama, and if he is ready to enact a conservative agenda on behalf of the Trump administration and a Republican Congress, the left is going to have to do better than it did today.

If you made it all the way down here, leave a comment Cancel reply

Are you a former fan of Tenured Radical? Do you want news, opinions, and links about the world of American politics and political media delivered to your desktop? Did you read my book, and now you want to know how the story continues — into, and beyond #Election2020? Sign up for my Substack, Political Junkie, here and get weekly dispatches.